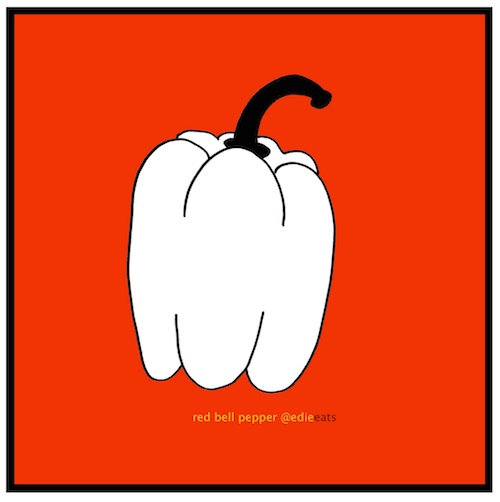 An old writer’s trick says that if you don’t know what to write, you’d write about your cats. But here’s a true story: feeding them inspired me to make this 5 Bell Peppers Paella! With five different forms of bell pepper.

My cats’ food is in a cabinet in my kitchen. And every time I reach for a can of their favorite brand, a mesmerizing aroma hits my nose. It’s from the drawer above, where I keep my dried ingredients.

It contains my homemade and store-bought dried mushrooms, sun-dried tomatoes and dried seaweed. Dried bonito flakes and tenkasu (fried mini balls tempura batter) for the Japanese pancakes called  okonimiyaki. The dried chipotles and chiles nuevo I bought at the Grand Central Market in LA two years ago. Chiles guajillo and chiles pasillo I bought at a local Mexican store (I can use some tips on how to use them!).  My homemade bouillon powder. Fried onions and krupuk (shrimp crackers that puff up beautifully in the microwave) I serve with nasi goreng, an Indonesian fried rice dish that became a Dutch classic. And I have Nõra peppers in it.

Fun fact: when I got all these items out of the drawer for easier listing them in this blogpost, my blogclub friends Alexandra and Stacey immediately got distracted from their work and we spend a while discussing it all.

In my 5 bell peppers paella I used Nõra peppers. Dried, round, sweet peppers from La Rioja region in Spain. I encountered them for the first time in the cookbook Casa Moro from the British Sam & Sam Clark who run a popular restaurant in London. When visiting Seattle two years ago I found the Nõra peppers at The Spanish Table, a store I warmly recommend!
Nõra peppers are the same ones that are used to make paprika, so no worries if you don’t have them. Just use a good pinch of paprika.

Usually Mr Eats makes paella and I do risotto. We never set it in stone, it just grew that way. But this version is mine.

And it definitely is not cat food!

This 5 Bell Peppers Paella has 1 raw bell pepper, 1 roasted bell pepper, olives filled with bell pepper, a dried Nõra pepper (see above) and one of my favorite spices; pimenton. This is a Spanish smoked paprika that has a mesmerizing aroma and gives your dishes a nice smokey touch. It comes in sweet (dulce) and spicy (picante) and you can buy it at WholeFoods, and I also saw it at the bigger cooking store chains.

Tip: Roast a bell pepper yourself if you don’t have them bought in a jar. Put a (red) bell pepper on a sheet pan lined with parchment paper and put it in the oven. Turn it to 400 F | 200 C and with thongs flip them over every now and then. After 40 minutes all sides need to be blistered. It’s okay if the spots are black, but try not to burn the entire bell pepper. Put the bell pepper in a plastic bag and let steam for 10 minutes. Then, the skin is easier to peel off. Discard seeds too.

I did:
Soak the Nõra pepper. Bring the stock to a boil. With your hands break open the nõra pepper and remove the seeds. Put in a bowl and pour the hot stock over it. Let soak for as long as possible. In another bowl, soak the raisins in the sherry.

Brown the chicken. Cut chicken breast into 1 inch | 2 cm pieces. Add salt, pepper and half the pimenton. In a skillet heat 2-3 tablespoons of the olive oil and brown the chicken over high heat. Don’t cook them all the way, remove them from the skillet once they’re slightly browned.

Saute the vegetables. Peel and chop the onion. In the rest of the olive oil sweat the onion on low heat, about 10 minutes. Cut the bell pepper into small cubes. Add the bell pepper to the pan and let brown a bit.

Make the paella. Add the rice to the pan and let absorb all fat and liquid, if any. Once the rice becomes a bit shiny, turn up the heat and add the sherry (without raisins). Stir to remove all the browned bits from the bottom of the pan and let all sherry absorb/vaporize. Add stock and rest of the pimenton, bring to a boil and let the rice simmer in the liquid until soft, about 15-18 minutes.

Prepare the rest. Chop the spinach in 1/2 inch | 1 cm stripes. Chop the roasted bell pepper into small pieces. Also chop both parsley and olives and set aside. Cut lemon into parts.

Add the spinach. Once the rice has cooked for about 15 minutes, start to taste it. Both for flavor and doneness. Add a bit of vegetable stock cube/paste for more depth in flavor. Is the rice almost done, put the spinach on top and chicken and roasted bell pepper on top of the spinach. Turn the heat up to medium and cover paella with a lid.

Finish the paella. After 5 minutes, the spinach should have shrunk a bit. Stir the paella and taste. Add salt and pepper.

Garnish the paella with some of the chopped olives, raisins and parsley and put the rest on the table as well. Squeeze 1-2 lemon parts over the paella before you take your first bite.