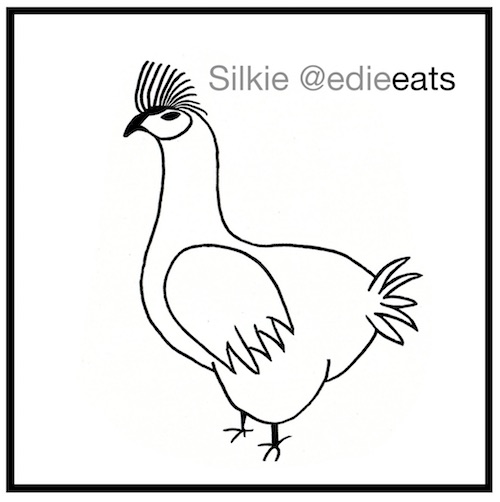 Would you eat your own chickens? I know I won’t. Basically for culinary reasons; by the time they have enough flesh on their bones their meat is firm, tough and requires good cooking skills not to dry it out too much. So let’s do something with their eggs instead; this chard frittata with blue cheese.

“I’ve got a vegetable garden, chickens and keep bees”.

I smiled when I heard my friend introducing herself. I followed with “I had the same when I lived in the Netherlands: a veggie garden with chicks and bees.”

Well, to be honest, I tried to grow some veggies and keep the bees happy. I felt a bit more successful with our three bantam chicks Kwik, Kwek and Kwak, which are the Dutch names for Huey, Dewey and Louie, Donald Duck’s nephews. They were a fun bunch that happily showed up in the mornings when we came out of the house to feed them, wobbling and toddling towards us. A friend took over the care for them when we crossed the ocean.

Last week we found our new trio to liven up our new garden. The all white fluffy Silkies have more peculiar characteristics like a tiny fifth toe, black skin and bones and they can’t fly. We found them on Craigslist and although I don’t want to talk too much about the circumstances we found them in, we’re sure we’re giving them a much much MUCH better life.

But how to name them?

Another trio of Kwik, Kwek and Kwak?

Their English names then?

We declined all these different translations of the 11th most published comic book characters in the world.

It was a serious option, until out of the blue Mr. Eats said the three names we decided to stick with. I almost saw the light bulb above his head flashing like crazy.

“We’ll call them Amalia, Alexia and Ariana. We’ll have our own triple A!”

The three A’s are the names of the three young princesses of the Dutch King and Queen. Well, the youngest princess is called Ariane, but we liked Ariana a bit better. And have a look for yourself; don’t my white feathered chicks look royal?

Although wikipedia told me that the black (!) meat of Silkie chickens are a real treat in some Asian cuisines, I find it a bit .. eh .. disrespectful to finish this post with a chicken meat dish. So let’s do some eggs instead. I made this frittata twice last week to finish up a bunch of chard. The blue cheese goes on top so it melts, browns, caramelizes and giving it’s best.

Tip: I bake my frittatas in an oven-safe skillet so I can cook and brown the top easily under the broiler without having to turn it and put it back in my skillet to bake it on the other side. Just don’t forget to use mitts as the handle will be super hot. Yeah, I burnt myself a few times. ;-(

I did:
Bake the chard. Peel onion and mince. Heat 2-3 tablespoons of olive oil in a 8 inch | 20 cm skillet and over low heat sweat the onions. Peel and chop garlic and add to the onions after about 7 minutes.
In the mean time clean the chard, remove the stem (optional – or just mince it and cook it with the onions) and chop the leaves in small stripes. Add to the onions and bake for 5 minutes, or until soft. Flavor with salt and pepper. Let cool down on a plate a bit.

Prepare your eggs. Break and whisk the eggs fluffy. Add the cream, salt and pepper. Chop the parsley and add as well. Mix in the chard.

Bake the frittata. Wash the skillet. Warm another 2-3 tablespoons of olive oil, doesn’t need to be hot. Add the egg mixture and crumble the blue cheese on top. Let cook over low-medium heat until the bottom is browned and the frittata almost set, 10-15 minutes. Heat the broiler and put the skillet on the highest rack for 4-5 minutes until cheese had browned and the center of the frittata is firm. Be careful here, it can go fast! I usually check every minute (thanks for timers!).

Tip: If you don’t like blue cheese, just put some small chunks of Brie or the stronger flavored Camembert on top.

Enjoy this Chard frittata with blue cheese with (or without) a green salad.