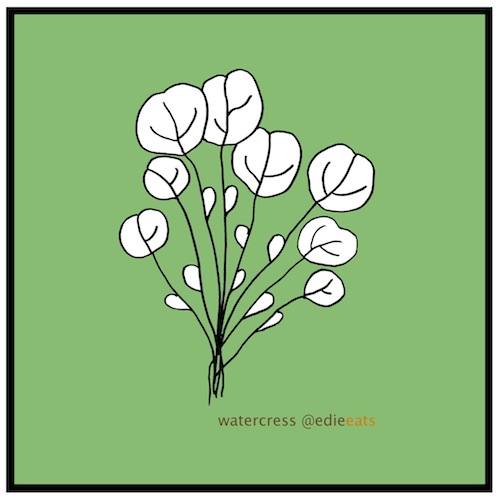 Put in the corner. And a bit ashamed about that. That’s how I felt.

But I didn’t grumble long about it. Took it as a lesson and celebrated my new knowledge with this recipe for In paper steamed Halibut with watercress sauce.

Let’s go back 4 days in time. I posted my latest favorite recipe: roasted red beets with Meyer lemon honey glaze. Despite my enthusiasm I didn’t make it again that evening. Nor any other day as I really like to cook a different dish every day. Which i did. So far, everything is okay.

Two days later I read another recipe for roasting beets. The food writer and I found each other in our love for beets and how to combine them with something sweet (honey) and sour (lemon). But Scott Hocker nailed what I was struggling with for quite a while and gave his blogpost the title: This is how you really roast a beet (here).

How to call it, when you wrap some beets in alumin(i)um foil and cook them in a hot oven? In Dutch we have a word for it (‘poffen’), but in English? I still don’t know. In my recipe I just named it the same as most people do, calling it roasting – although I realized that technically it isn’t. That’s what Scott said out loud.
When roasting you don’t wrap your ingredients in foil. On the contrary, you expose them to the hot dry heat that’s in your oven. Like I’m doing here with tomatoes and here with carrots. In foil you basically steam or just cook your beets.

(And ooops .. I also called it roasted garlic!)

But … steaming is exactly what I’m aiming for in this recipe. By loosely, but air-tight folding fish in either aluminum foil or parchment paper, the added liquid (white wine) steams the fish and engulfs the delicate meat with the flavors of the vegetables you wrapped with it. A perfect technique for fragile fish fillets. Or the bit firmer Halibut fillets, I won at a contest at Food Gal’s website! Still have some fish left, so stay tuned for more fish recipes!

Update: Baked beets, like with the potatoes, alliterates nicely but doesn’t ‘feel’ right. So I on twitter Scott and I discussed it further. He admitted there is no name for it in English and suggested “steam-roasted”.
My former student of my Dutch cooking course proposed popbeet, just like popcorn being popped corn. You must know in Dutch we actually use the same word (“poffen”) for popping the corn and ‘steam-roasting’ foil-wrapped beets. Not too become too detailed, but we don’t say pofcorn though, neither pofmais as ‘mais’ is our word for corn. Eh … are you still there? Please scroll down to my newest recipe below!

Let’s give this recipe the proper name no one confuses. The French are even more clear and call this type of dishes ‘en papillote’, which simply means ‘in paper’. Parchment paper that is, but I prefer aluminum foil since that folds more easily to really keep its content air-tight. Depending on the fish size and thickness it takes 10-20 minutes to cook ’em. Great for dinner parties as you can prepare and keep the little presents in your fridge until prepping time.

For the watercress sauce:
2-4 (sun-)dried tomatoes on oil
1 bunch of watercress
1 tablespoon of lemon juice – I happened to have Meyer lemons

Prep the paperwork. Cut two pieces aluminum foil or parchment paper big enough to easily wrap the fillets. Coat the middle of each piece with some of the oil.

Prep the package. Peel and cut the (half) shallot and carrot in thin slices. Divide over the two sheets. Heavily salt and pepper the fish en put on top of the veggies.

Make the watercress pesto. Put the sun-dried tomatoes and watercress (stems and leaves) in the food processor, run it and add as much of the tomato oil to make a smooth sauce. Add lemon juice (start with half of it!), salt and pepper to taste. Spoon half of the pesto on the fish fillets.

Finish the ‘papillote’. Add the white wine to the fish and fold the package lightly around the fish, just by just snuggling the edges. Watch the video below if you use parchment paper. Either way, make sure no air can escape, but not to pack it too tightly.

Cook in the oven until the fish is done. Most of the times, the paper will bold up, which is a nice way of telling us to take it out and serve each of your table companions a nice, warm and gentle little present. This doesn’t work with aluminum foil, though.
My 8 oz | 225 gr halibut fillets of 1,5 inch thick took about 20 minutes. The flatter, smaller en less firm the flesh (for other kinds of fish), the sooner it’s done. Aim for still some ‘rawness’ in its mid. Almost every fish I know is better when it’s slightly undercooked compared to overcooked.

Serve with the rest of the watercress sauce.

Tip: Serve this Halibut ‘en papillote’ like I did with this fennel risotto, omitting the tomatoes. Or just put them in the oven alongside the fish wraps. I added some slivers of fennel to the packages as well!

How to fold ‘en papillote’ with parchment paper?