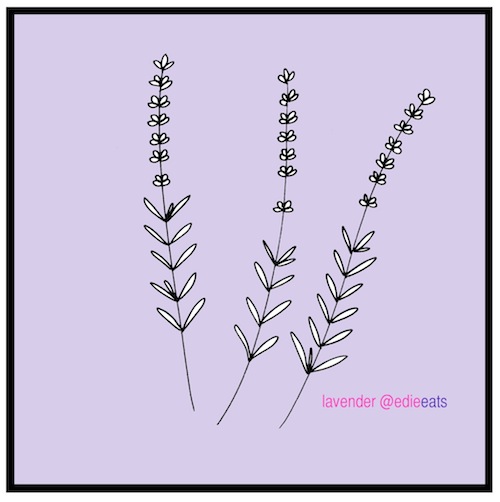 Last Sunday I taught a No Recipes Class. But how does that work, cooking without recipes? Well, you can feel inspired by a nice color combination. Like I was when I came up with this Lavender Peach Dessert!

In our class’s setup time we’re always a little bit restless, as we never know who’s going to enter the door and comes in to cook with us. For this No Recipes Class my colleagues and I were even a teeny tiny little bit nervous, as we also didn’t know what we were going to cook.

We just put out all the ingredients that we wanted to use. Some wilted spinach, mushrooms that looked much nicer a few days ago, leeks that we had peeled a few of the outer leaves off, basil that..  well, you’ll know the story. These were the preferred veggies to cook with, not to have to throw them away.* We hoped we could inspire our students to use ’em!

We finished the leeks, used at least one bunch of celery and the basil found its way into a dish as well. In less than two hours we made 7 completely different dishes and hopefully encouraged the students to play with their food a bit more.

Yesterday it was my turn to play with food myself.

Friends were coming over for an informal, saying-goodbye dinner and we didn’t want to make too much fuss about it. So I started early, slow roasted a whole chicken with potatoes underneath, grilled some slices of zucchini with thyme and made salad with charred fennel. No fuss, right? 😉

And while I was buzzing in my kitchen I saw the peaches in my window sill, next to which I had put a tiny twig of lavender that my neighbor’s 6-year-old picked for me. The color combination of the bright yellowish orange of the peaches and the pale purple of the lavender inspired me to combine them for desert.

* Of course we also had a nice variety of better looking, fresher veggies, and everything else that we have in stock was available to use as well. Don’t think we serve our guests crappy stuff! But like Stacey said last week; it’s good to use ingredients that would have gone to waste otherwise.

Since I’m not a baker nor an experienced desert maker, I only could keep it simple. I baked halved peaches in some quickly made lavender oil and let the natural juices the peaches released and some extra sugar morph into a nice sauce to serve them with.

Let’s make it:
Make a lavender oil, by infusing the olive oil with the lavender. Peel off the flower leaves and add them to the oil. Let it warm and infuse in a skillet on the lowest possible heat for about 15 minutes.
Then sieve the oil and put it back in the skillet. Turn the heat a bit higher.

Bake the peaches. Make sure you halved and de-pitted them, carefully saving the released peach juices. Bake the halved peaches cut side down in the oil for 3 minutes or so.

Make the sweet pan sauce, by adding the sugar, the peach juices and the lavender blooms to the pan. My peaches weren’t very ripe so I added 2 tablespoons of sugar, but feel free to use less if they’re sweet. Let simmer with lid on until the peaches are soft and the sauce has a syrup-y consistency.

Serve the warm and soft peaches with the pan sauce, ice cream and whipped cream.

PS Have you seen my new page with all the public cooking classes that I teach?