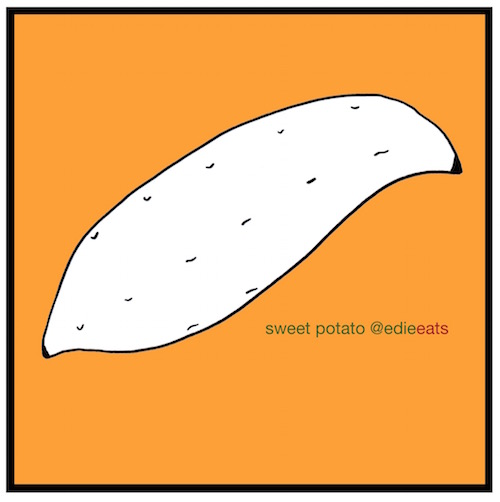 I don’t do it often, but the day before yesterday I tried it again. And made these Oven roasted glazed sweet potatoes from someone else’s recipe.

What did I just wrote?

I followed a recipe??

But Edie, you said once that you never follow recipes!

That’s true. I simply seem to be unable to do that anymore.

I did though. I followed recipes to the letter for quite a long time when I was learning how to cook. And it helped me.
In a uncountable number of ways.
I learned to eat a lot more things than I liked before I started to cook. Some recipes simply lured this picky eater into trying out things she’d never even had heard before.
And I also learned a thing or two about cooking and reading about cooking. Till I got up that point that I started tweaking recipes, bit by bit.

Or should I say, bite by bite?

Until that day I got stuck when following a recipe. If I recall correctly it was for an open lasagna with fava beans, spinach and mozzarella.

Sounds good, huh? I thought so too and set myself to make it.

It wasn’t because the recipe didn’t work, it was more that I couldn’t get the recipe to work for me. While reading and cooking, I started to change up things. The order of doing things. The timing of cooking. I ended up with a dish that you could describe as an pen lasagna with fava beans, spinach and mozzarella.

And it made me happy.

Because it made me realize I was a cook.

Same thing happened this week. I came across this recipe for Oven roasted glazed sweet potatoes and knew I had found a purpose for those sweet potatoes in my cabinet.

But again, I struggled to follow it to the letter.

What attracted me about the recipe that I found online was the glazing part. Glazing gives such a nice and deep sweet flavor to ingredients that by itself can be quite boring (think chicken!).
Now that I’m writing down my version of it, I realize the answer to the question that popped up while I was cooking: why to marinate the sweet potatoes as you’re going to glaze them anyways? It’s only now that I realize that in the original recipe they put the glaze on after some oven baking, while I brushed it on before the potatoes went into the oven. Mystery solved.
I rewrote the recipe towards my new found knowledge and made it simpler than the original.

Start with the glaze. Put all ingredients but the sweet potatoes in a small pot. Leave rosemary whole and grate the garlic. Bring to a boil, stir and let cook over medium hot to reduce the mixture until it has a syrupy like texture. About 3-4 tablespoons (eyeball!) are left.

Bake the potatoes spread out on a sheet pan covered with parchment paper in the oven for 25 minutes. Halfway, carefully (because hot!) toss the sweet potatoes in the rest of the glaze and continue to cook.

Enjoy it with a simple salad with oranges, feta and Kalamanta olives and a fresh pork sausage from your butcher.

3 Replies to “How not to read a recipe : Oven roasted glazed sweet potatoes”