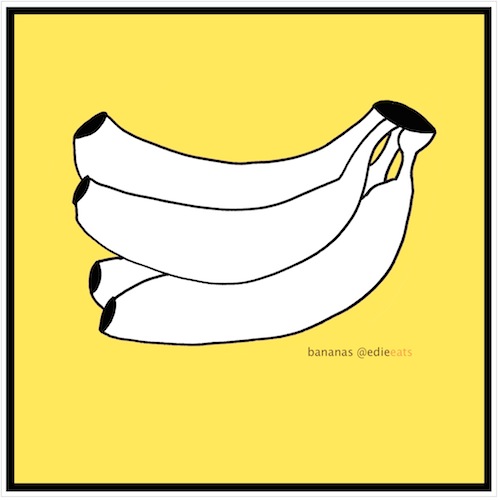 3 Bananas getting brownish + 2 eggs that needed to be eaten = 1 banana cake!

Well, actually I baked 2 halves, and was wondering if that would change my way of baking banana cakes for ever.

Usually I refuse to eat any meals airplane companies serve, in particular their hot food. So whenever I have to fly I spend a few hours in advance baking something. It can be a savory quiche, with leeks or zucchini for example, other times I fancy a more sweet tooth. This time I had no choice. The bananas that were getting brownish told me what to do. As I didn’t want to make my usual recipe for banana cake with walnuts (here in Dutch), I looked online for suggestions.

And I found this intriguing recipe of Azélia, in which she first dehydrates the bananas by cooking them in the microwave. She learned that from America’s Test Kitchen, of which I heard only recently. They do the same kind of stuff I did in the cooking course I designed, in which my students (in The Netherlands) did experiments to understand what’s going on in their pans and what cooking techniques give the best results. We sometimes even deliberately failed recipes to be able to compare the difference in taste and structure with a well cooked version of the same dish. Without my students, I guess I have to do the experiments myself now!

The intriguing idea of dehydrating the bananas is to enhance the banana flavor. America’s Test Kitchen puts it like this: “But if you want to make a moist, tender loaf with over-the-top banana flavor, you need to think like a mad scientist.” Well, I’ve been trained as a scientist, so I’ll take up that challenge!

With only 3 bananas, 2 eggs and the need for just 1 cake, I divided all ingredients in two batches, followed Azélia’s description (Did you notice the similarities in both her and my logo?) for dehydrating half of the bananas, used a baking sheet to separate both batters from each other in my cake tin and did the tasting with Mr Eats and a friend we shared dinner with. The rest of the banana cakes I ate high in the sky.

On purpose I kept the recipe as simple as possible, to really be able to test what half was best. The half with the dehydrated bananas or the half for which I just mashed 1.5 banana. The batter of the later was more voluminous, more moist and in the oven it took over a bit on the half where the dehydrated banana batter was rising. I couldn’t say which one smelled better as they were baked in one tin.

But the price for the best flavor goes to …

… well, that depends on what you like most! The ‘normal’ banana cake was more moist, a proper juicy banana cake. The experimental version was more like a ‘normal cake with a slightly banana taste’. This cake was a bit dryer, but still cakely enough to be really good. If you don’t compare the cakes at the same time like we did, we guessed it would have been hard to tell the difference.

Our friend preferred the latter as he isn’t fond of bananas, Mr Eats preferred the first. And I? I liked both, but decided that the experimental version is too much work for a banana cake that was not significant (did I tell you I was a scientist?) better than a normal one.

RECIPE BANANA CAKE [with an experiment]

If you want to try it yourself, here’s the recipe for both versions. By using both baking power and baking soda, the cake will become very light and yummy!

For the experimental banana cake: Peel the bananas and put them in a microwavable bowl. Cover with microwave foil (or normal cling film in which you make a few small holes with a sharp knife). Let the bananas cook for 4 minutes. Sieve the bananas over a pan, to collect the moist that comes out. Use a spoon of a (flexible) spatula to press out as much water as possible. [I took this step very seriously and had a very dry of banana left in the sieve.] Cook the water until it’s reduced by at least half. Mix the syrupy banana liquid with the banana solids.

For a normal, but still very good banana cake: Peel and mash the bananas with a fork.

Mix. Use a handmixer to beat up the butter and sugar until they are light and fluffy. Can take a few minutes!

Add the flour and the baking power, and stir in the milk and baking soda.

Bake. Put the batter in your rectangular cake tin (buttered or covered with a baking sheet) and bake in 45 minutes.

Oh, and if you’re cake(s) turned out to be undercooked, here’s a tip of advice!