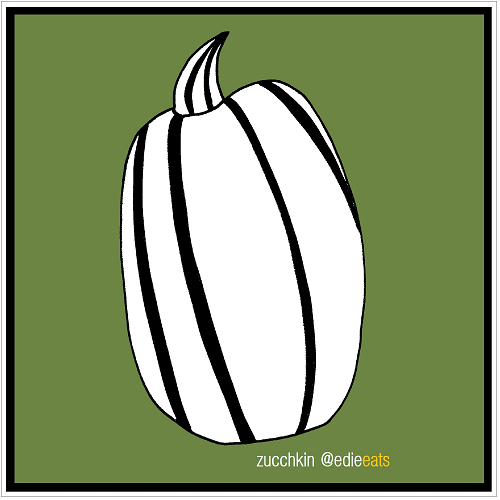 Classic dishes are hard to call your own. But I’ve never seen anyone serving the classic Italian Pasta Carbonara in a zucchini like i did, so maybe this time it’s acceptable to do so.

Said my neighbor. After an extensive tour through her vegetable garden, we stopped at a bunch of plants that could either be zucchini or quash. They look very similar, so both were possible. “It’s probably an Italian race of zucchini. Last week I had a smaller one, and the skin was soft and edible. I don’t know if that’s the case with this one.” And she handed me over a large obese zucchini. Or a green pumpkin.

At home I immediately took my knife and cut off a slice. It had beautiful white and firm flesh, so zucchini still was a possibility. At the next slice, I again found this firm flesh, but only at the outer sides. In the middle, the pulp was soft and full of large seeds. A pumpkin after all? I stopped caring about it.

My next cut was exactly in the middle of the fruit, cutting it into two large pieces and I scooped out all the soft pulp and seeds. While selecting the seeds to dry them later on, my mind explored all options possible to use this zucchkin.

Somehow I came to think about Spaghetti al Parmigiano, that dish for which a large Parmezan cheese is scooped out and flambeed with whisky to melt the cheese. After that, the spaghetti is tossed with the whisky cheese melt for an amazing pasta dish.

It gave me the idea to serve my version of Pasta Carbonara, that other great Italian favorite, in a new way.

RECIPE PASTA CARBONARA IN A ZUCCHINI (or squash)

Precook the zucchini/squash. Cut it into two halves. Scoop out the soft flesh and seeds. Chop the green herbs and the garlic. Mix with that much olive oil, that it becomes a thick dressing. Rub in both inner halves of the zucchkin with half of the dressing. Cook in the oven until the flesh is tender enough to your taste. Test the firmness while cutting in with a sharp knife. My took about 45 minutes.

Tip: You can use several green herbs, as long as their firm. I had a mixture of rosemary, lemon thyme, lavender, tarragon and oregano.

Grab your skillet. Cut the bacon in small pieces and fry them in a dry skillet at medium heat. Remove from the pan and use the left shorting (and maybe some extra butter) to fry the peeled and chopped onion. Use your lowest heat possible. When the onions are soft and sweet, add the wine. Let vaporize almost completely at higher heat. Add cream and the rest of the green herbs oil and cook for about 1 minute. Turn of the heat.

Yep, I know about the dispute of using cream in your Pasta Carbonara or not. I’m mostly pragmatic. When I have some leftover cream that need to be used, I use it. Else, I add an extra egg in stead of the cream from this recipe.

In the mean time .. Beat the eggs and mix half of the Parmesan cheese and some freshly grinded pepper through it. Wait for the zucchini and spaghetti to be ready.

Then act quick. Add bacon to the onion-creammixture and reheat it at a very low fire. Just enough to warm it again. Drain the spaghetti, mix cream and then the eggs through it. Serve the pasta in the cooked zucchini with rest (or more) of the cheese.

Enjoy! Eat the pasta and occasionally take a bite out of the zucchini.
What’s left of the veggie, you can puree to a lovely soup. No matter if it’s a zucchini or a squash.

Update: It even became more confusing to me, when I online tried to find out what vegetable my neighbor gave me. You guys have multiple words for the same veggies! Zucchini and courgette, and pumpkin, squash and gourds. All are related, also with melons and cucumbers.
While eating, to me the vegetable seemed to be a pumpkin/squash, but then still unripe. It was crunchy and resembled a bit the structure of a pineapple, but without its juiciness and flavor.
Today, at the Irian supermarket I saw Italian courgettes, which were called summer squash online. The fruits resembled my neighbors, but were about 1/6 of its size.