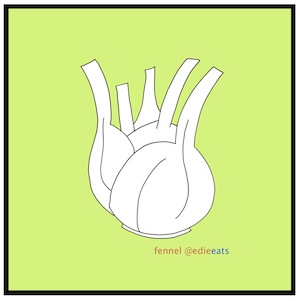 If I don’t know what to cook, I usually end up stirring some risotto. This recipe risotto with fennel and roasted tomatoes is one of my favorites.

When I arrived here in California we moved into a small apartment. It had a reasonable kitchen and the two bedrooms each had their own bathroom. Although I probably would have made another choice when I had to design an apartment like that (i.e. make the kitchen bigger), it was fine for its purpose. From there we could search for a house to make our home, one where our cats Juli and Japi could go outside instead of using their litter boxes in that second bathroom.
The kitchen cabinets of this temporary apartment were filled with the basic equipment like plates, cutlery, pots and pans. Good enough to cook with while I was waiting for the ship to arrive in the harbor with my own cooking gear. Unfortunately, the container was without any of my food.

Like other women collect shoes, I collect food. My walk-in food cabinet was stuffed! With all kinds of oils, vinegar, jars, cans, home made pickles, dried products like pasta, rice, grains, but also various kinds of flour, and a huge collection coffee for Mr. Eats and tea for me. Sadly, I wasn’t allowed to bring anything with me.
So I had to start collecting all over again. The first spices I bought were salt and pepper. Within two weeks I had risotto rice, pasta and millet. Paprika, cumin, coriander seeds and chili for my Mediterranean favorites followed, as well as soy sauce and it’s Indonesian version ketjap manis (sweet, thick soy sauce) and sambal (hot chili sauce) for a fried rice dish called nasi goreng.

Somehow I liked that camping style of cooking: mostly using fresh ingredients and only some from your stock. Especially since I discovered a fun spice mix that soon became our favorite condiment. It turned out great in pasta dishes, roasted chicken, over roasted potatoes, to flavor broccoli and risotto among others. Like sprinkling it over roasted parsnips. Okay, I’ll stop now.
Whole Foods called its mix of dried garlic, onion, celery seed, black pepper, lemon zests, parsley, red bell pepper, fennel, basil, oregano, rosemary and savory simply “Herb Mix”. We started to call it the Wonder Jar, and I just bought a new jug, even though I have almost all the herbs and spices separately in my cupboard by now.

One of my favorite dishes is risotto. Whenever I don’t have any inspiration to cook, I usually end up making risotto. It isn’t that difficult, it only requires some stirring from time to time. So pour yourself a glass of white wine and enjoy your me-time in the kitchen. This version with fennel and oven roasted tomatoes is my fav way to bring summer to my table.

* Of course you can make your own spice mix. In a mortar crush 1 teaspoon fennel seeds with a pinch of coarse sea salt. Add dried oregano, rosemary and savory – combined 1 tablespoon (and/or try some thyme!), some paprika, freshly grounded pepper and about 1 teaspoon fresh lemon zest. This home made mix contains less ingredients, but these are the most important. As you may add fresh onions, garlic and parsley in most of the dishes you would use this herb mix, you don’t have to put them in the mix.

You do:
First. Preheat the oven at 400 F | 200 C degrees. Preheat the stock in a small pan till its boiling point. Keep it warm.

Prep the risotto. Peel and cut the onion into small pieces. Preheat a skillet and add 2 teaspoons of butter. Sauté the onions over low fire until they’re soft and translucent. It may take 10-15 minutes.

Roast the tomatoes. Cut the tomatoes in 4-6 parts and toss them with some olive oil, salt and pepper. Put them on a baking dish and roast for about 30 minutes.

Continue with the risotto. Cut the fennel in half, remove the hard core and cut the halved bulb into fin slices. Add to the onions together with the peeled and chopped garlic and the Wonder Jar spice mix. Let simmer for about 7-8 minutes.
Deglaze with the white wine on high fire and stir firmly to scrape up all bits of food from the bottom of the pan. Let it cook, while occasionally stirring until all wine is either vaporized or absorbed by the rice.

Add stock. From now on it only takes your attention every now and then. Add half a cup of stock to the risotto and stir. Let the rice absorb it, and you see little ‘holes’ in the rice. Stir, add the next portion of wine, stir well and wait again. Continue doing so until you’ve used all stock.

Grate. Find some time in between the stirring and the sipping to grate the cheese.

Taste. After 15 minutes start tasting the risotto. You want a firm, but not under-cooked rice. Stir in the extra butter, two thirds of the grated Parmesan, some salt and pepper.

Serve the rice in deep soup plates with the extra Parmesan and the roasted tomatoes on top. Maybe some extra of the spice mix as well?

Enjoy!
If you have it, also sprinkle some fresh lemon zest and finely chopped parsley on top of the risotto. Non-vegetarians can opt for cooking some bacon before cooking the onions. If you love fish, grill a few scallops or some other fish to serve with this fennel risotto, while leaving out the cheese.