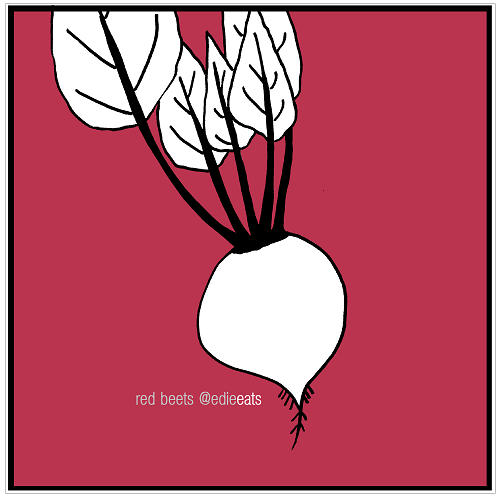 Living in a new country is all about adapting. To a new language, a new culture, new dining out habits … well a new way of live. New food as well, as we didn’t have Meyer lemons in the Netherlands although there is something Dutch about them!

I used them in this Roasted beets with Meyer lemon honey glaze and I would love to eat it again tonight! Really.

A new life means also new habits at the supermarket.

When I neared her counter she didn’t look at me. She didn’t look at the person she was helping either. She looked kinda sad and upset. Also the boy packing the bags was looking annoyed, as if they’d had a fight. “Hi how are you?” was her short murmured greeting.

It made me feel a bit uncomfortable. But I did it anyway.

In my first weeks in the US I was very surprised being asked this by a cashier, my hairdresser or the waiter. In the Netherlands we only say a mutual “Hallo” and that’s it. It only does not sound short, it is. As human interaction with someone who you serve of who serves you is a scary thing to do.
But I realized soon enough that there are multiple ways to answer this question that everybody asks but don’t seem to be interested in its answer though. Just a short “Fine” is what I hear a lot. And no one seems to notice that the question isn’t returned. Instead of following those examples, I made a sports trying to give and get an authentic answer, show genuine interest.

“Fine, thanks”, she mumbled.

Was there a little spark in her eye or did I just pretend seeing that?

I didn’t had a plan with the bundle of red beets I bought, but when I looked at the tiny Meyer lemon tree with 7 fruits in my garden I knew I wanted to combine them. Meyer lemons are Chinese citrus fruits, brought to the US by Dutch Frank Nicholas Meyer, according to wikipedia. They have a beautiful fragrance, are rounder and deep yellow (going orange) and a bit sweeter than normal lemons. But still very tangy and sour, and that’s where the honey comes in. I liked it a lot, hope you’ll do as well!

Update: Two days later food writer Scott Hocker wrote How not to roast beets. Roasting is quite a different technique than the one I’m using below, and claims not to use ‘roasting’ for it. He’s sooo right! I wrote all about it in my next blogpost (with new recipe!).

A great side with duck and buckwheat (boiled in vegetable stock with 1/2 teaspoon crushed fennel seeds, some salt and 1/2 teaspoon dried thyme). But you can have ’em with mashed potatoes and some nice fish as well. I’m thinking salmon!? Hmmm, will definitely try the glaze on that one as well one day.

You do:
Roast the beets. Wrap them in aluminum foil and cook in an oven of 400 F | 200 C degrees until done. When you can stick a knife in the beets without any resistance, they’re fine. Depending on their size that can take up to 2 hours. So plan ahead!

Make the glaze. Heat the fat in a skillet till quite hot. Slice the Meyer lemon into very thin slices and brown them until the juices in the lemon slices start bubbling. Turn and repeat. Add the honey and water and stir well. Let simmer for a short while. Sieve the glaze, with a spoon press the juices of the lemons for more flavor.

Do the glazing. Carefully peel the hot beets, cut in parts and mix with the glaze. You might want to start with half of the glaze first, as it can be a bit tangy. Which is nice and brightens up the dark earthy beets, but I can imagine you want to be careful the first time you make this.

Tip: Left-over beets and buckwheat with green lettuce leaves, half an apple in pieces and some extra olive oil make a great lunch!

Would love to know how you like this recipe! Tell you me below?