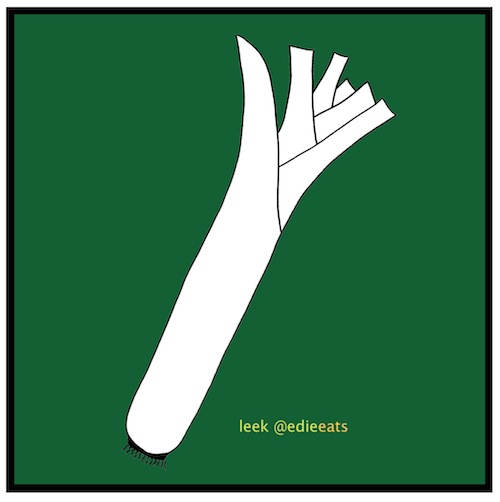 That was what I was staring at for quite a while when I sat down for a blog post a few weeks ago.
I had no clue what to write about or what recipe to share.

But here it is! Seven tips for more creativity in the kitchen and a recipe for Roasted sticky leeks.

It’s not that I didn’t eat that week. I really had cooked some nice meals. I had some fun encounters and conversations about food. I had taught some people a few cooking tricks, and learned some back too. I just didn’t see a story in them.
So I just sat there, at my friend Alexandra‘s house where we come together to write.

When her six months old daughter caught my attention this blog post suddenly started to write itself.

In my car I checked my email and saw the email another friend had sent me. She was completely out of ideas for a cooking workshop where each student had to be involved, but couldn’t cook as there weren’t enough burners. Could I help her out?

I started my car and had to pull it to the side of the road immediately to jot down some ideas that popped up.

While I checked an online thesaurus how to phrase ‘getting ideas’ in a nicer way, the site referred to an article titled 7 Steps to creativity. It said:

First of all, what is an idea? Well, according to James Webb Young in his book ‘A Technique for Producing Ideas’, first published in the 1940s:
“An idea is nothing more nor less than a new combination of old elements.”
So how do you combine old elements into new? Luckily, Young tells us:
“The capacity to bring old elements into new combinations depends largely on the ability to see relationships.”
Young says the ability to see relationships between facts is the most important factor in coming up with ideas. This, he says, is a habit of mind “which can be cultivated.”

You can forget about the rest of that article, as the 7 steps that follow this quote tell you to jot down ideas that pop up and work on them.

I can do that better.

Here are my seven tips for more creativity in the kitchen.

In the kitchen it works best just to cook a lot. Like (almost) every day. Test as many different recipes as you can. Learn to master a few recipes so you get to understand them. Cook dishes from all over the world. Cook the dishes you grew up on. Follow the tips in recipes how to replace certain ingredients. Oh, and did I mention to cook a lot?

It basically comes down to ‘just’ (Yeah, I hear ya!) cook as much as possible. That way you train yourself and eventually learn to combine old elements into something new.

That’s exactly how these Roasted sticky leeks saw the light. I love to put leeks into the spotlight. Most of the times I braise them in some white wine, but it clicked when my eye fell on the oven. Let’s do the math:

I love leeks (old element)
I know roasting (another old element) +
Combined they’re Roasted sticky leeks, aka a new dish that I had never made before but definitely will make again.

Leeks usually are a hidden ingredient, tucked away with other ingredients. But is fun to bring it to the spotlight every now and then. When roasting, their sweet, fresh, earthy flavors appear and the juices that leak out give the leeks their sticky-ness.

Roast the leeks. Pour the olive oil over the leeks and sprinkle salt and pepper on top. Roast the leeks in the hot oven for 30 minutes, or until completely soft.

Serve the leeks without the outer 1 or 2 leaves. You may want to chop off the dried out top and the sturdy roots too.

Tip: Pour the sheet pan juices over the leeks.

3 Replies to “7 Tips for more creativity in the kitchen: Roasted Sticky Leeks”