“Hey Edie, what meat would you add to this dish?” he asked, when he looked at the simple vegan sensational salad that we made with farro, carrots and pistachios.

It wasn’t planned, but coincidentally I had made it a vegan cooking class.

No, don’t stop reading. Remember the word meat in the first sentence?

Vegans! Don’t be afraid! You can keep reading too! 😉

The theme of the cooking class was Great Grains and the menu suggested a dish with farro and pistachios and a vegetable soup with quinoa. So I went into the kitchen and came back with two recipes that I liked and wrote down for the class.

Vegetarian, yes, I was aware that I didn’t have meat or fish in the meals for this cooking class. But it was only when I recognized two people walking in that had attended my previous vegan cooking class, that I realized that today’s class would be vegan too.

And everyone in the class was interested in learning about farro and quinoa. And (as usual) I wasn’t the only one talking and explaining: A native of Peru told us how she always cooked quinoa and was curious to see what toasting the quinoa would do to its flavor.

We tasted and discussed the soup, while I was plating said sensational salad with farro, carrots and pistachios. We had roasted carrot discs, cooked farro in vegetable stock and made a simple but strong lemon dressing using both the juice and zest.

Then the student looked at the salad, raised his eyebrow and asked his question. “Hey Edie, what meat would you add to this dish?”

I could relate. The dish looked pretty basic and simple. A few ingredients, a few colors, and yes, no animal protein.

Instead of answering his question, I asked the group.

“What’s your impression? What would you add?”

They stayed silent for a while. Salmon, someone opted. A few nodded, hesitantly. The girl from the vegan class said she couldn’t think of anything. And the questioner only could agree.

“It’s hard to think of something”, he said. “It’s all so complete.”

That was exactly what I was hoping to hear after he took a bite.

You don’t cook and eat with your eyes only (remember?). The goal is to satisfy all your senses, and your taste buds in particular.

This simple and pretty easy dish exactly does that. It just happened to be vegan, and it didn’t need animal protein to it. The chewy farro, the still firm sweet roasted carrots, the strong lemon-y dressing and the crunchy pistachios just make the dish work. 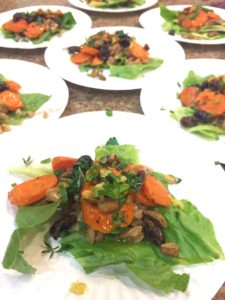 This vegan sensational salad with farro, carrots and pistachios is an easy, but not super quick dish to make. The farro takes some time to cook, but that gives you time to casually prepare the other ingredients. You can eat it while the farro is still warm, or have it all cooled down.

Cook the farro according prescription in the boiling stock. This can take up to 45 minutes. Start tasting after 20 minutes or so. I like them when they’re soft, but still chewy, not too firm. Somewhere after 30 to 40 minutes of cooking them.

Roast the carrots. Preheat oven to 400 F. Clean carrots and thinly slice diagonally and toss with salt, pepper and 1-2 tablespoons olive oil. Spread out on a sheet pan and roast in the oven until done, about 15 minutes. Take them out of the oven when they’re still firm.

Toast the pistachios in a dry skillet until browned a bit. Let cool and coarsely chop.

Make the dressing. Zest and juice the lemon. Whisk half the zest, 1 tablespoon of the lemon juice, salt and pepper with the olive oil until emulsified.

Chop the herbs finely. Clean Romaine and tear the leaves into bit-size pieces.

Season the farro, once cooked and drained (if needed), with 3/4 of the dressing.

Plate the salad. Start with the Romaine and scoop the farro on top. Then the carrots, drained raisins and chopped pistachios.

Garnish with the rest of the herbs, remaining lemon zest, and pour remaining dressing over the salad.

And let me know what meat, fish or cheese you would add to this dish! 😉