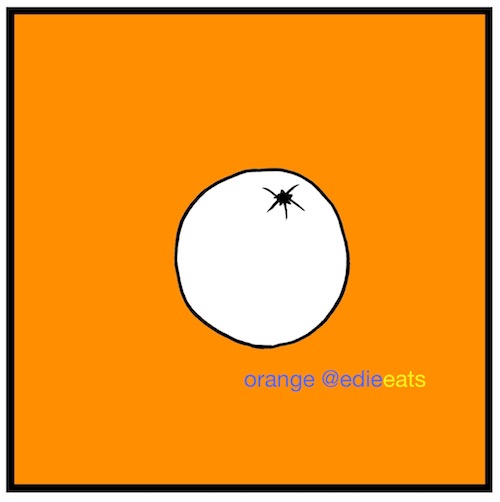 Last week I showed that I cook about 80% of my dinners myself. But what do I cook when it not ends upon my blog Edie eats? Let’s talk about that now.
And cook the first dish I made in 2017: a Venison stew with orange and cinnamon.

One of the reasons to write down all my dinners was to help me get inspired.

Yes, I too have those days that I don’t know what to cook.
For me, I figured, it would help knowing when I made what. As you know, I like to vary my dishes based on the main starch ingredient (rice, pasta, potato, dough, etc) while alternating vegetarian, meat and fish in my dinner.

So knowing when I had my last pasta or rice could help me think up a dish for tonight. If it was a while ago, I feel free to eat pasta. Or rice.

As a (former) Sociological Researcher I’m used to draw all kinds of conclusions out of large data sets. So the first thing I did, when I lined all my meals below each other in an excel document, was recoding them into numbers. All nights were divided into 4 categories:
0. I had to work that night, so didn’t cook dinner at home,
1. I cooked,
2. I mixed and matched something (or Mr. Eats cooked our dinner, not me), and
3. we let someone else do the cooking for us aka we went out for dinner or got take away.
The results can be found in last week’s post.

Now, what did I cook on those 150-ish nights that I cooked?

I’m leaving the 2nd category of making dinner out of my results here. As all the dishes that I made for lunch.

I made as often a pasta dish, something with rice or a dinner that involved some sort of a dough (read: everything between quiches and nachos). About 45% of my home cooked dinners was based on either of these starch categories.
Slightly more often (22%) I opted for potatoes as my main starch. Not really surprising, as Potato, Vegetables and Meat are the Dutch Holy Trinity where I grew up on. Roasted potatoes, a good braadworst* and a salad is one of my classic go-to’s when I don’t feel inspired.

On contrary to what you might expect when you’ve read all my blogposts in 2016, I didn’t make that many Sensational Salads. I noted only 8 over the year. About 10% of my dinners contained couscous or an old/new/revived grain(-alike); and soups, Asian style dinners (which can be rice or noodles), polenta, bbq and my dinner parties complete the list as one big rest category (14%).

A special shout out to risotto: half of my rice dinners were made with risotto. I made a paella or 2 and used the same technique a few more times when making pilaf. Plain boiled rice apparently is not my favorite way of eating it.

To celebrate, the recipe I made on the first day of 2017: Venison stew with orange and cinnamon.

Venison stew with orange and cinnamon

Stews are great to make on (long) weekends. If you double this recipe, you’ll have extra for your freezer. Handy for category 2 cooking nights! 😉

I did:
Brown the meat. Check the meat and cut up, if needed, in 1 inch size cubes. Pat dry and add with flour, a generous amount of salt and pepper in a bowl or plastic bag. Toss and make sure meat is coated well.
In a Dutch oven heat up the oil till almost smoking and brown the meat. Dark and crunchy on at least one side.

Add the onions. Peel and chop the onions in small pieces. Add to the meat and cook for a few minutes. If it doesn’t all fit, remove meat from the pan fist. Peel and mince garlic and add for 1 minute.

Tip: If you like a more filled stew, brown two hands full of (crimini) mushrooms and let them add their flavor to your stew.

Deglaze your pan. By simply adding the wine. Bring it to a boil and scrape all browned bits from the bottom of your pan into your future sauce.

Add everything else and let simmer. Chop the orange into smaller pieces and simply add with all other ingredients to the pan. Don’t forget to put the meat back in, if you took it out! 😉 Put a lid on and let simmer for about 3 hours.
Some recipes say 2 hours, so you can start testing at that point, but my meat definitely needed more time. I like it soft! It also depends on the size of your meat, of course.

Enjoy with potato puree and some stir fried Brussels sprouts.