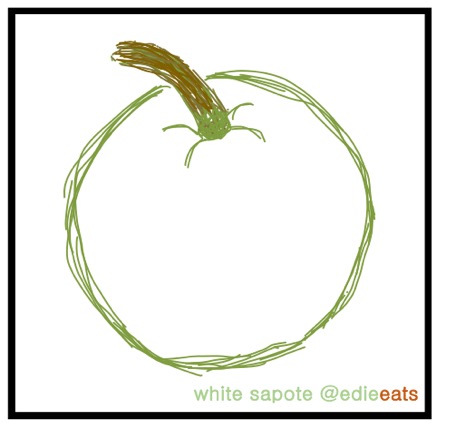 The last two months, I have been bringing the white sapotes to my cooking classes. The tree is loaded again and bears more fruits then Mr Eats and I can eat. The entire neighborhood is helping out, but not to much. I was need for a better marketing plan to get rid of all these thousands of white sapotes.

The fruit of a white sapote is so creamy that it almost looks like ice cream once you have blitzed it up in a blender. So I tested a version with blending and freezing the fruits’ pulp plain and with lime juice. That was nice, but not really special.

Then I found a note from last year that said:

Did I measure the ‘parts’ in weight as a proper European would do? Or am I already too Americanized in the kitchen and did I use cups?

Time to take up the experiments for white sapote ice cream with sweetened condensed milk again.

Long story short, if you want to make ice cream manually, really really really follow the instructions to whisk it up regularly during the first part of the cooling process.

Diving a little bit into making ice cream (and getting an ice cream maker for my birthday later this week helped with that!), I learned that there are 4 important factors to make ice cream: sugar, fat (usually cream), chilling and churning.

An ice cream maker does the latter for you. But without one, you have to do it yourself. Trust me, no need to stubbornly say that it’s not needed. I went that route for us and came back to tell you it leads nowhere.

My motto for this summer.

To compensate for all the work, for the cream and sugar I went the easy route: I used sweetened condensed milk.

No ice cream maker, but what tools do you need instead?
Although some recipes say you can make ice cream this way using a fork or spatula, I would recommend using an electrical device. You just can get way more air into your ice cream that way. (But let me know if you get good results with your fork!)
For this recipe, I have used my balloon whisk attachment that came with my immersion/stick blender. But a hand mixer would work just as well, maybe even better (double whisks, double the air?). And it definitely splashes less.
If you have a blender and are able to put the entire jar in your freezer, you definitely can try that too. (Jar only, not entire machine!) Using only the blender attachment of your immersion/stick blender could work too, but you want to use a liquid measuring cup for easier and spotless blending.

But … I don’t have white sapotes!
No worries, you can use this technique on other fruits as well. Mango is quite similarly in texture to a white sapote, so I’d suggest you start with that fruit. Just taste the mixture before freezing and if you like it, follow instructions. You might want to add a bit more sweetened condensed milk or a bit more lime juice to balance texture and flavors.

But remember, whatever you do …
… don’t forget: churn and chill.

I did:
Prepare your gear. Put a large, deep metal bowl in your freezer. Put the can with sweetened condensed milk in your fridge.
Prep the white sapotes. Peel the fruits and squeeze them between your fingers. Pick out all the seeds. Transfer to the now cold metal bowl and put back in the freezer for 30 minutes or until the sapote pulp is cold. No need to freeze it over.

Tip: The white sapotes have multiple seeds, usually about 5, but it can be less or more. Some are full grown and as large as an almond that’s still in it’s skin, other are as small as an almond sliver. Especially when your using an (immersion/stick) blender, you want to have all seeds removed not to bite on small hard pieces that were broken up in the process. Another reason is that the seeds supposedly are poisonous.

Mix all ingredients until smooth using an electric mixer/blender (see above). Make sure all is well combined and light in texture.
Freeze the mixture.
Mix again, after 15-20 minutes. Using a fork or spatula, scrape off the already freezing sides of the bowl first and mix into the rest of the sapote pulp. Then use your hand mixer to mix some more air into the mixture.
Repeat this for at least 2-3 hours, or until the sapote ice cream has a the consistency of thick soft serve.
Then freeze the white sapote ice cream for a few hours to firm up. Or eat some and freeze the rest. It’s up to you!

I will put some pictures of the process on my Instagram Stories/Highlights.

If you do have an ice cream maker, you can make the white sapote ice cream mixture as described above. Cool and have it run in your machine according to instructions. It took my machine 30 minutes to double the volume and create a super soft and smooth ice cream. Yum!